Well, my first foray into photojournalism turned out to be a leeee-tle bit harder than I expected. Juggling two cameras and managing social media posts while eating, drinking and sweating my ass off proved to be fairly challenging. But I think I managed to put together an interesting little story for you so here goes:

It was the Fourth of Firsts - with one or all of us doing things or going places for the first time. First first - picnic in Riverside Park to watch the fireworks. My lovely sister-in-law and brother-in-law made special trips to pick up my most favorite olives ever, Castelvetrano - can't hardly find them in St. Louis - and some incredible prosciutto, culatello, and sopressata from the oh-so-amazing  Salumeria Rosi.  And Mojitos! As the sun was setting, families, hipsters, the under paid and the overprivileged came together as one on the banks of the Hudson to watch the fireworks. 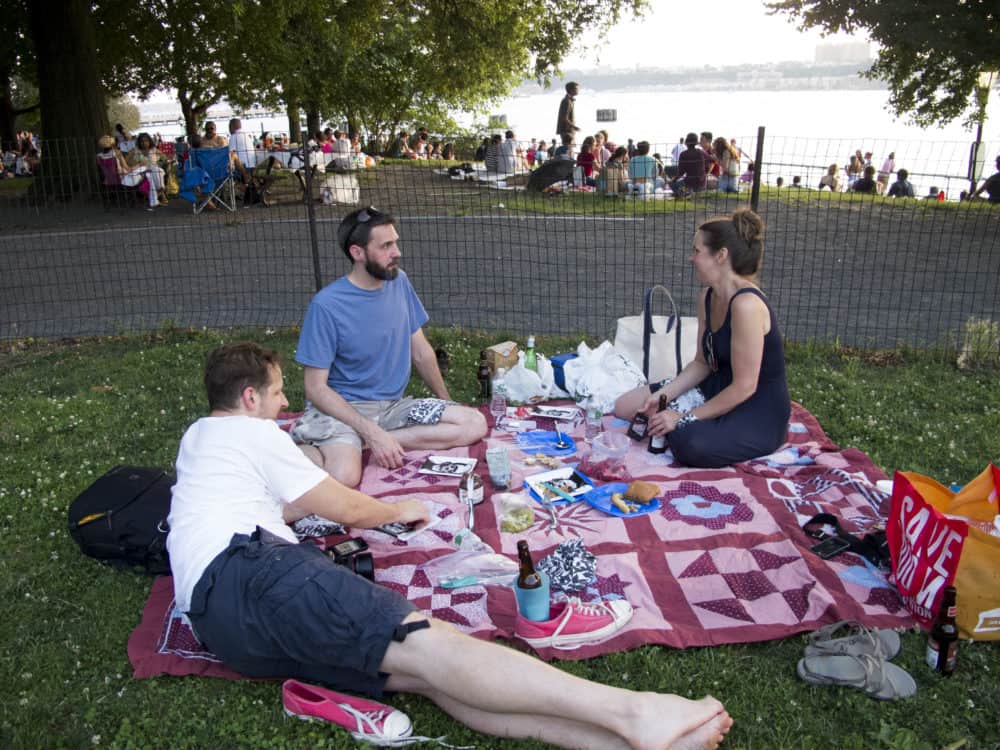 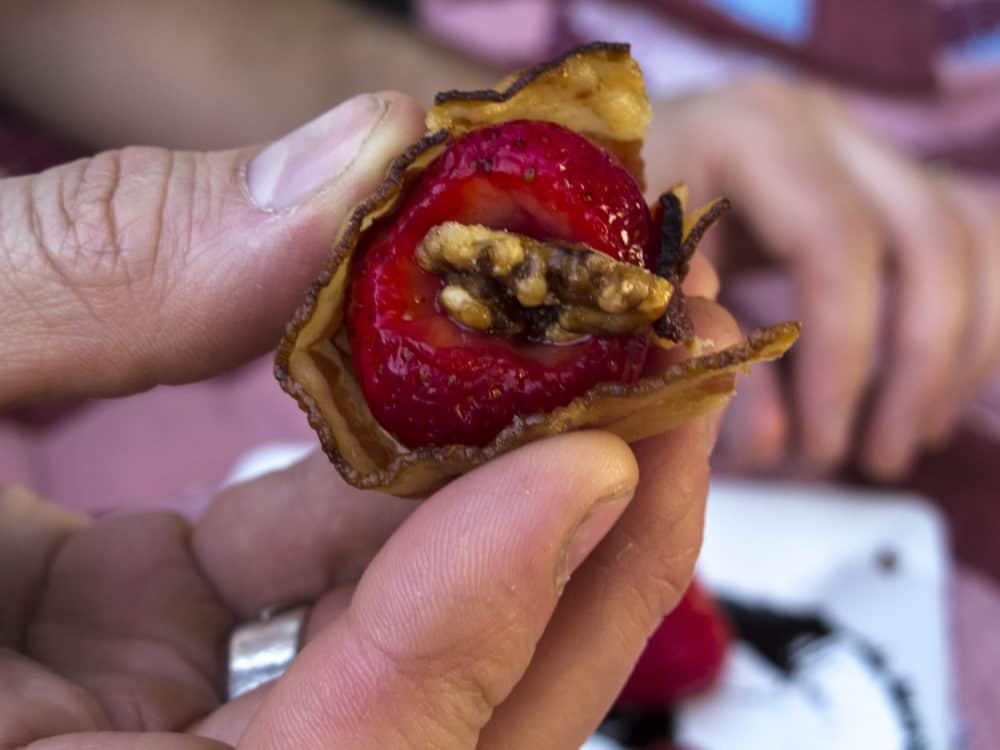 Something my husband Brian came up with... there's a recipe in there somewhere, stay tuned.

Woke up to find there was a little house on top of the apartment building across from our hotel. How did it get there?! How can I get one? 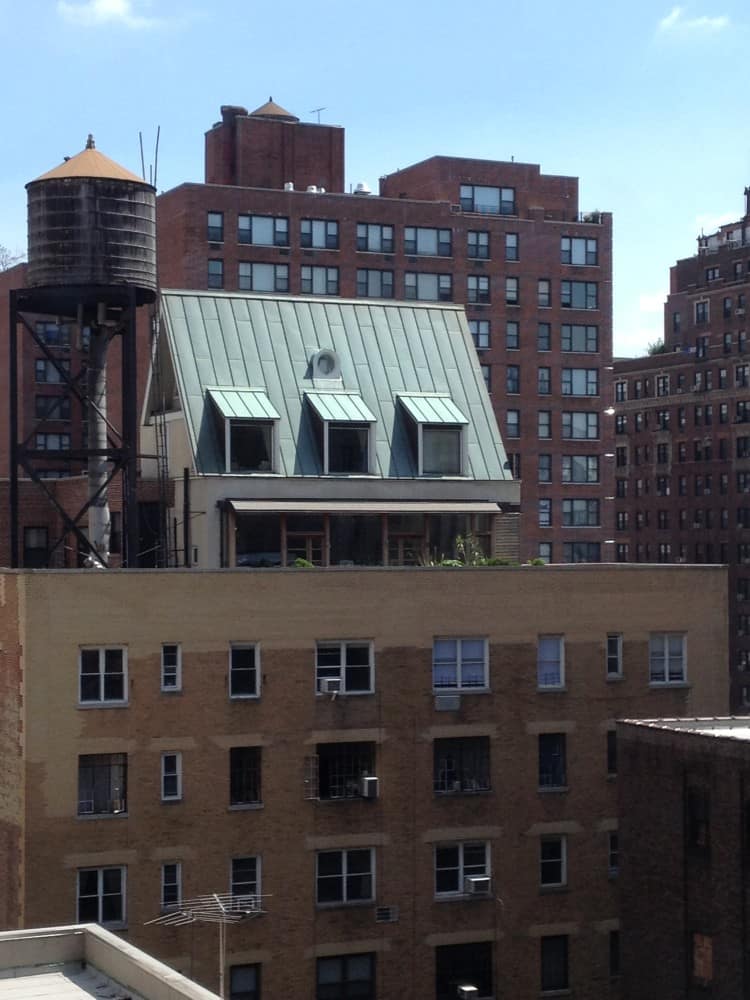 I had forgotten how absolutely sweltering NYC can be in the summer with all of the concrete just baking the heat into your brains. On Friday, the heat index level was officially swamp-ass, so we sought refuge in the cool darkness of the Park Avenue Armory (a first for all of us) for Paul McCarthy's controversial exhibit WS. We weren't exactly in the mood for lunch after that... but we scraped the images of Snow White rolling around naked in "brownie mix" and other vulgarities off the inside of our skulls and moved on. And Melinda had been raving about the sloppy, salacious Cambodian sandwiches at Num Pang Sandwich Shop. 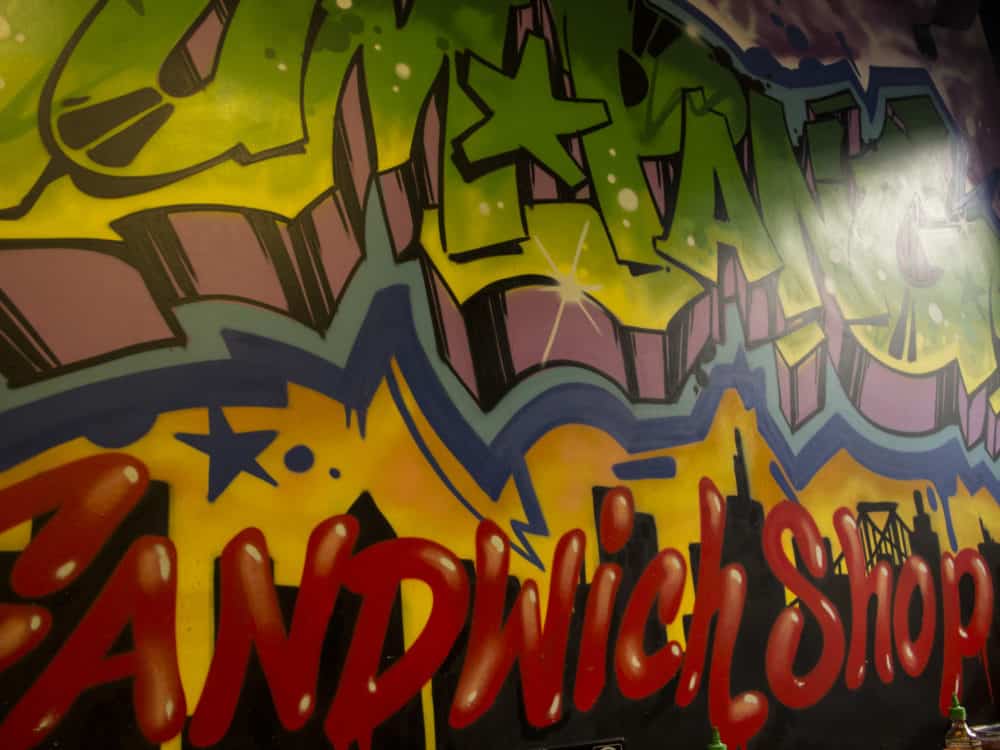 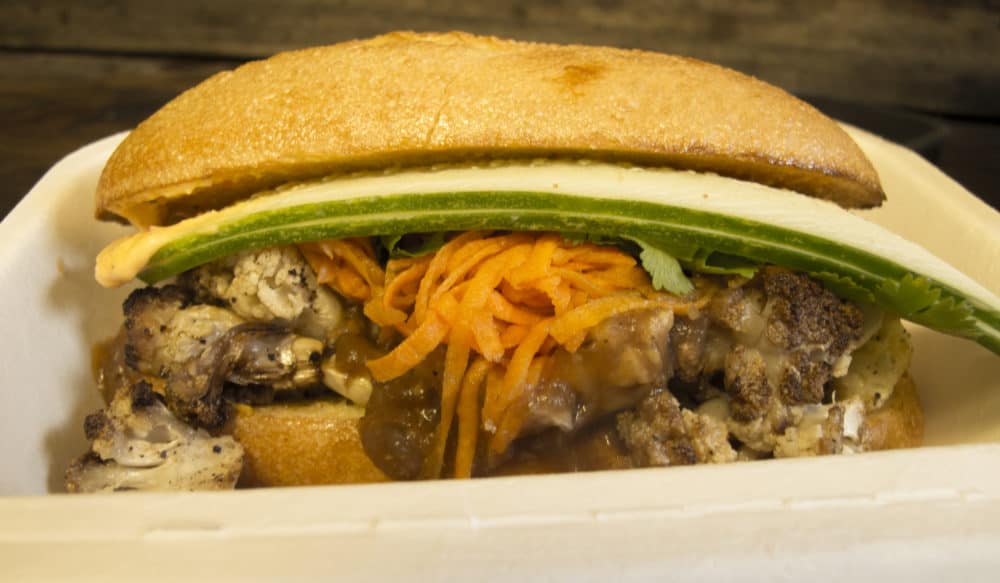 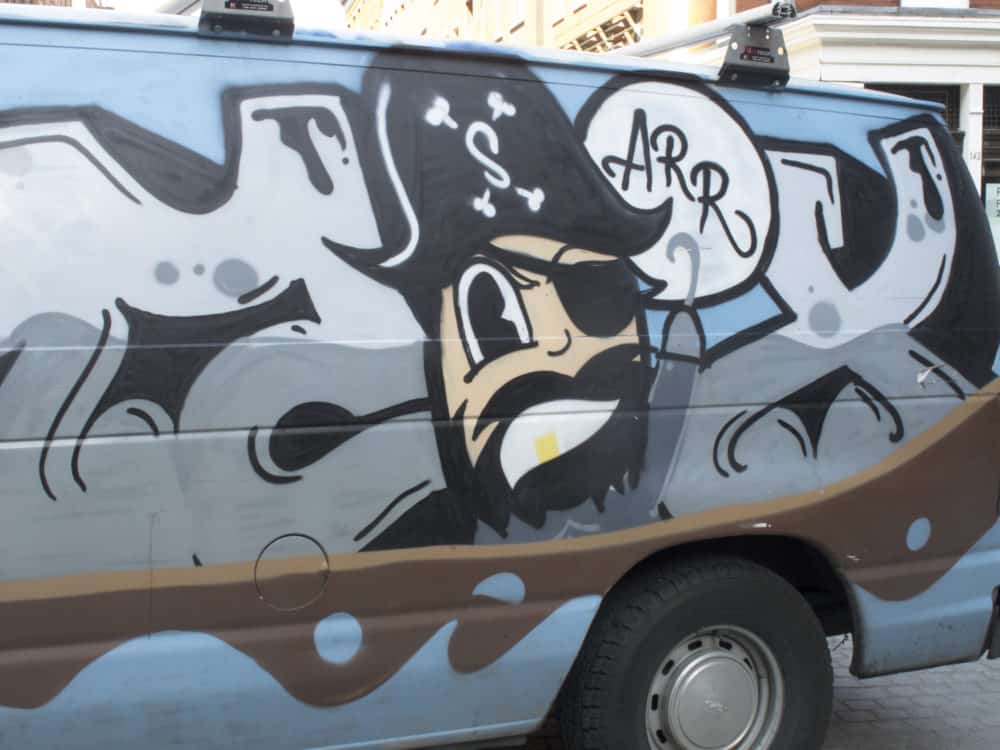 Too hot to do anything else but drink. Smorgasbar at South St. Seaport is a daily, mini-outpost of the weekend Smorgasburg (more on that later.) The area still hasn't recovered from Hurricane Sandy, so this delightful beer garden is bringin' a little life back to the area and it was super-fun and another first-for-all. 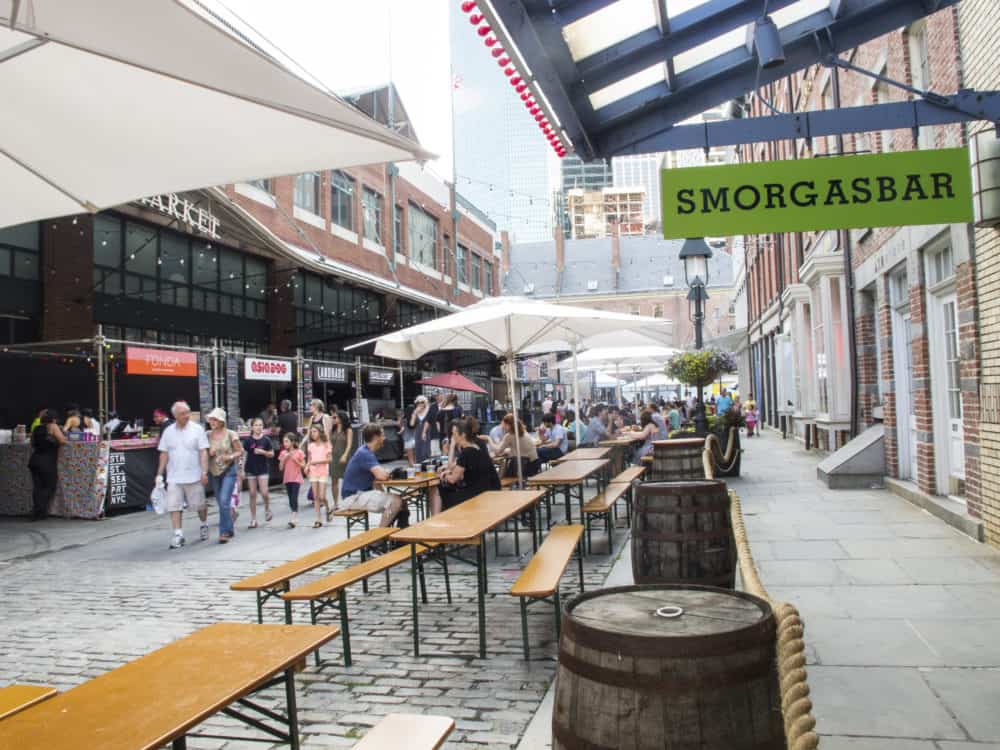 Beers and oysters from Brooklyn Oyster Party did the trick. 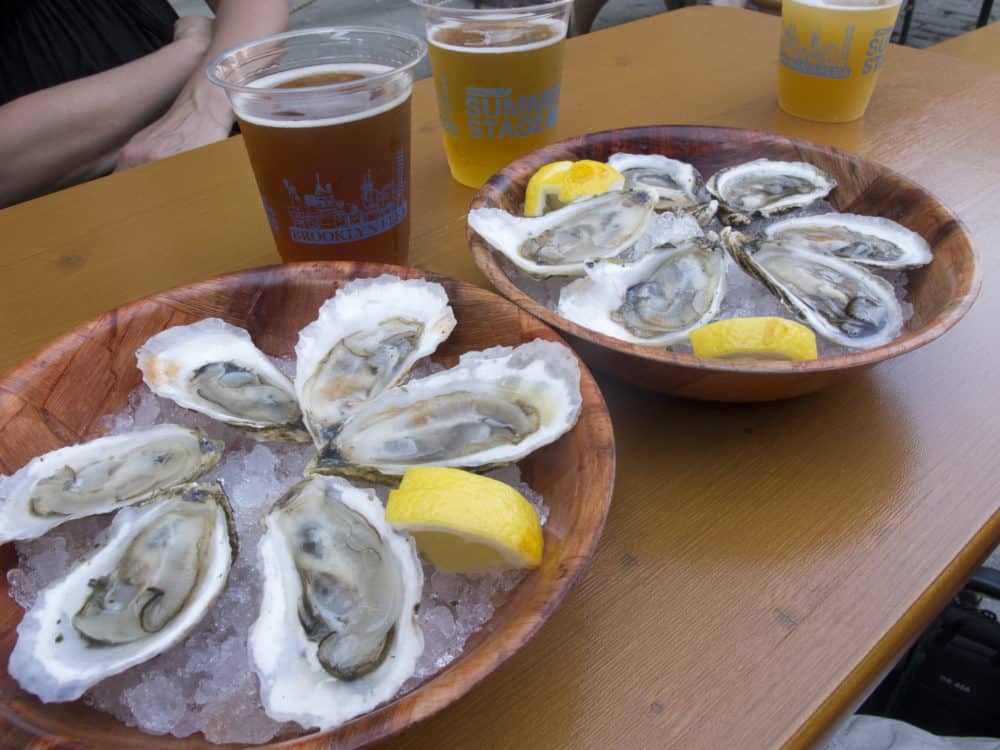 Ryan noticed we were near Fraunces Tavern, where George Washington bid farewell to his officers after the Revolutionary War. So we drank where George drank. On the day after Independence Day. And it was pretty cool. First-for-all. And this beer was a first-for-me. It smelled like peanut brittle and tasted like sunshine. 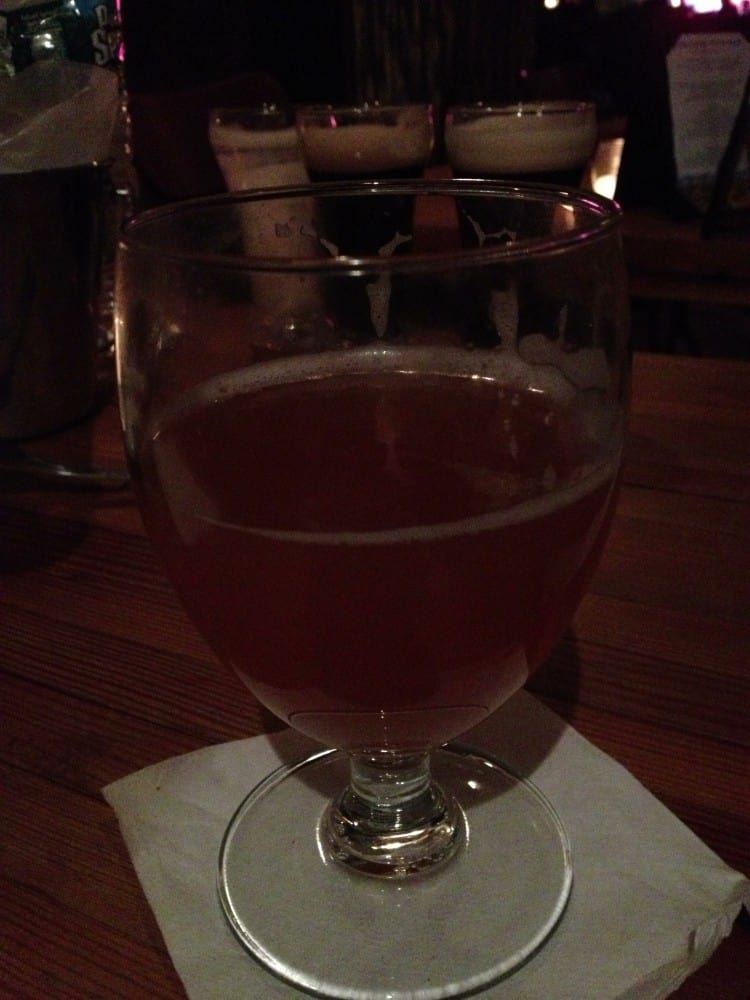 So, the great thing about NYC over the Fourth of July is that so many people who live there get the hell out of town. So it's like your own personal playland, uncrowded and blissful. Not in Times Square or at The Met or any other touristy places but in the neighborhoods, where people actually live. So it was way past time for dinner and Melinda thought that if ever there was a time that we could get in to Mission Chinese Food it would be tonight. When nobody was home. So we gave it a shot. But even on Fourth of July weekend, when NOBODY was ANYWHERE, there were STILL 50 people in line at Mission Chinese at 9:45pm. So we opted to soak up all of that freedom beer with some tacos at the freaky-fun Snack Dragon Taco Shack a couple of doors down. First for Brian and I, Melinda and Ryan had been there the last time they tried - and failed - to get into Mission.

I know, more crappy iphone photos, but I had a buzz, and the lamp was made of sunglasses!

Regardless of the heat, I was dead set on Smorgasburg. And if you're still keeping track, that's a first for Brian and I. A quick, scenic ride on the East River Ferry delivered us to an asphalt parking lot at high noon for what I had anticipated would be foodie heaven. And it was, well it would have been, if we all hadn't been absolutely miserable from the heat. And it was so bright, it was almost impossible to take pictures. Aside from the fact that I had sweat in my eyes. I kept looking around at all the cute little Brooklyn hipster girls like "Why doesn't their hair look like they just got out of the pool?"

We had the roasted veg bruschetta with chevre from Sunday Gravy: 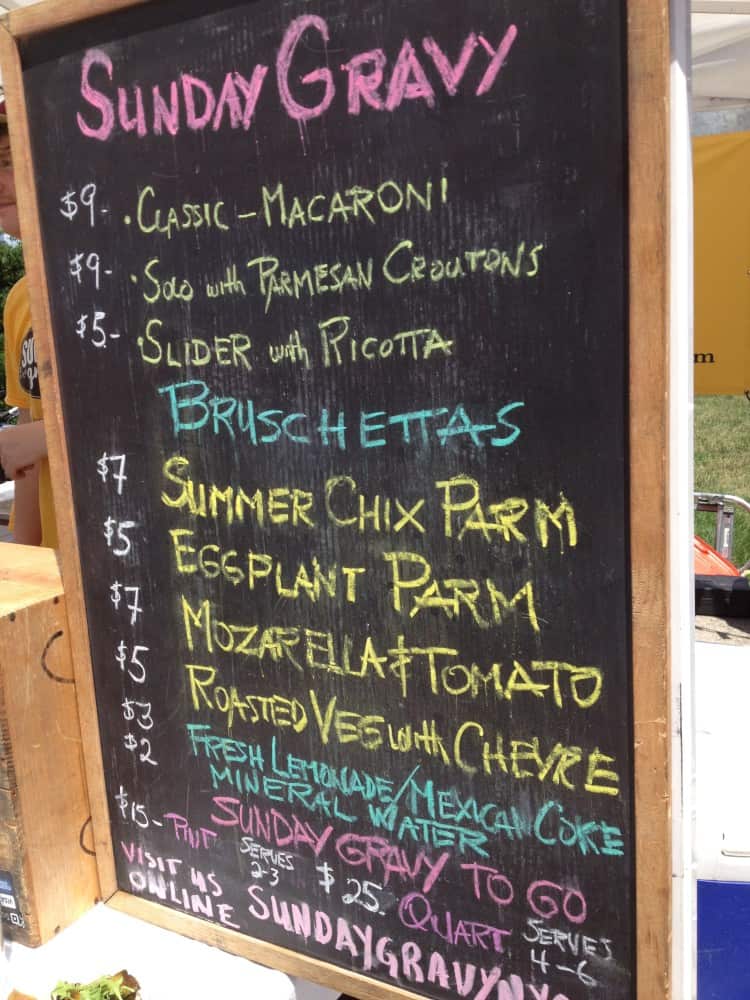 I managed to try these fried anchovies from Bon Chovie: 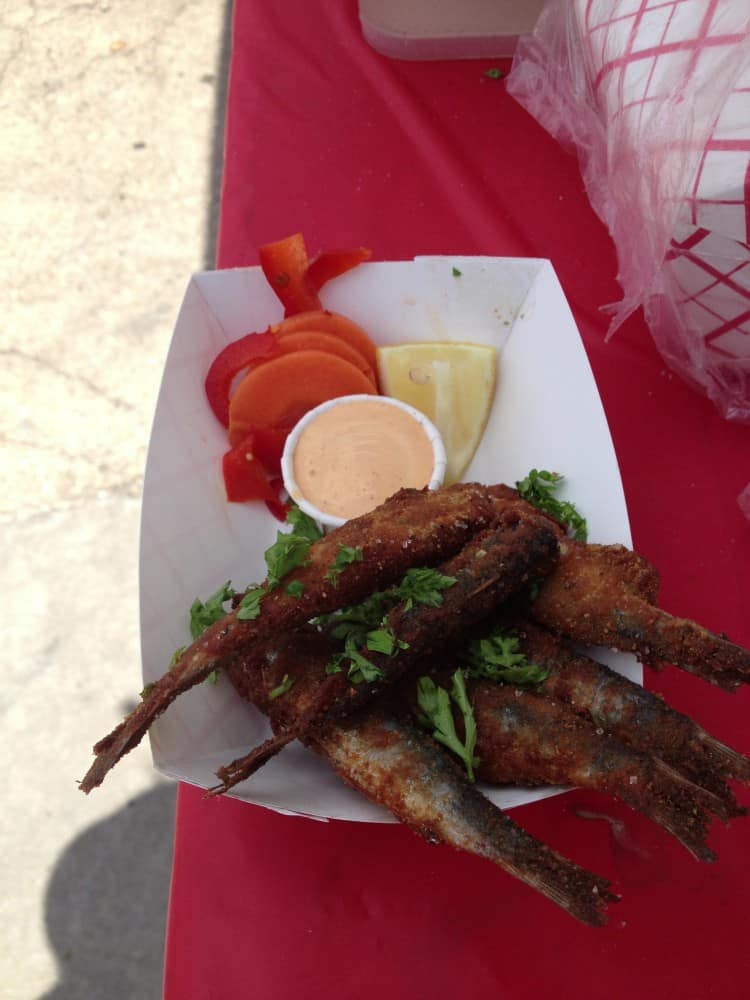 And these foie gras beignets - yes you heard that right - from ??? I can't remember. I had sweat in my eyes. 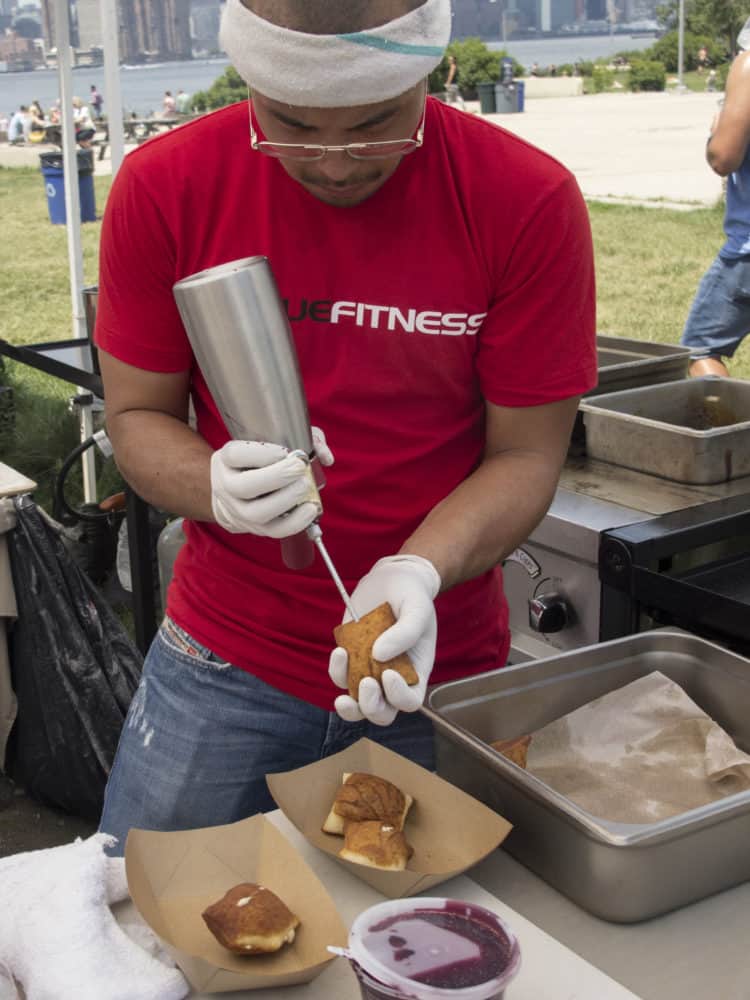 And tried to cool off with some chilled ramen with blue crab from Yuji Ramen. 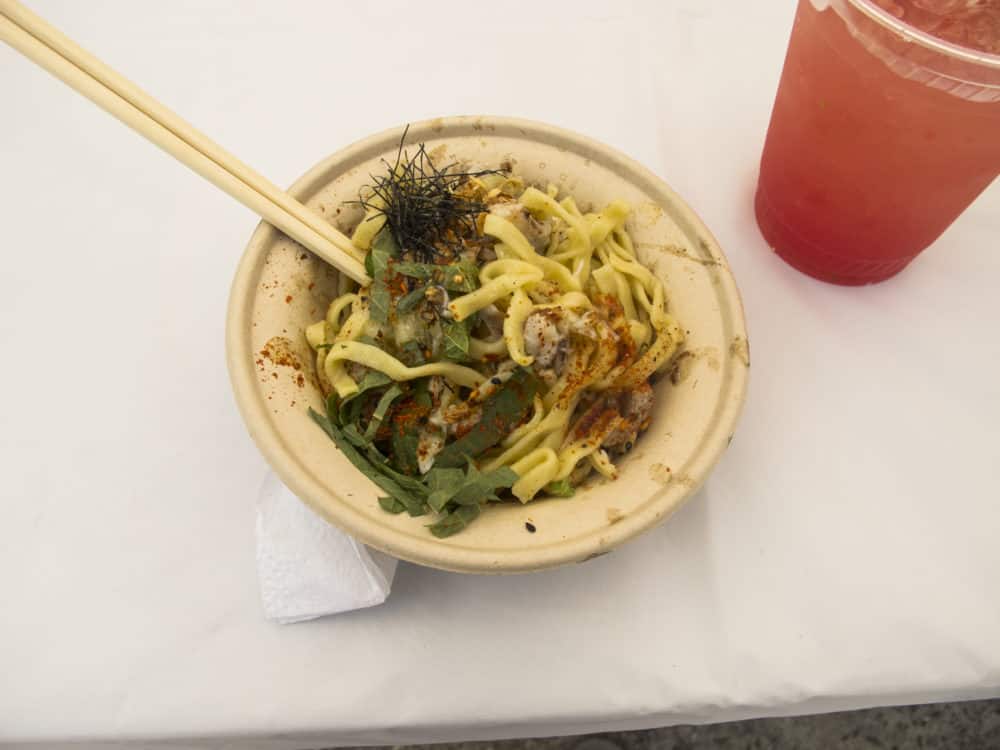 I had a small heat stroke - not kidding - so we sat down at Extra Fancy so I could recover. After some much needed rest and freshening up, we set out to find a rooftop bar. I was kind of obsessed with doing this for some reason. So I dragged everyone else into my fantasy and we ended up at Rare View. Another first-for-all. 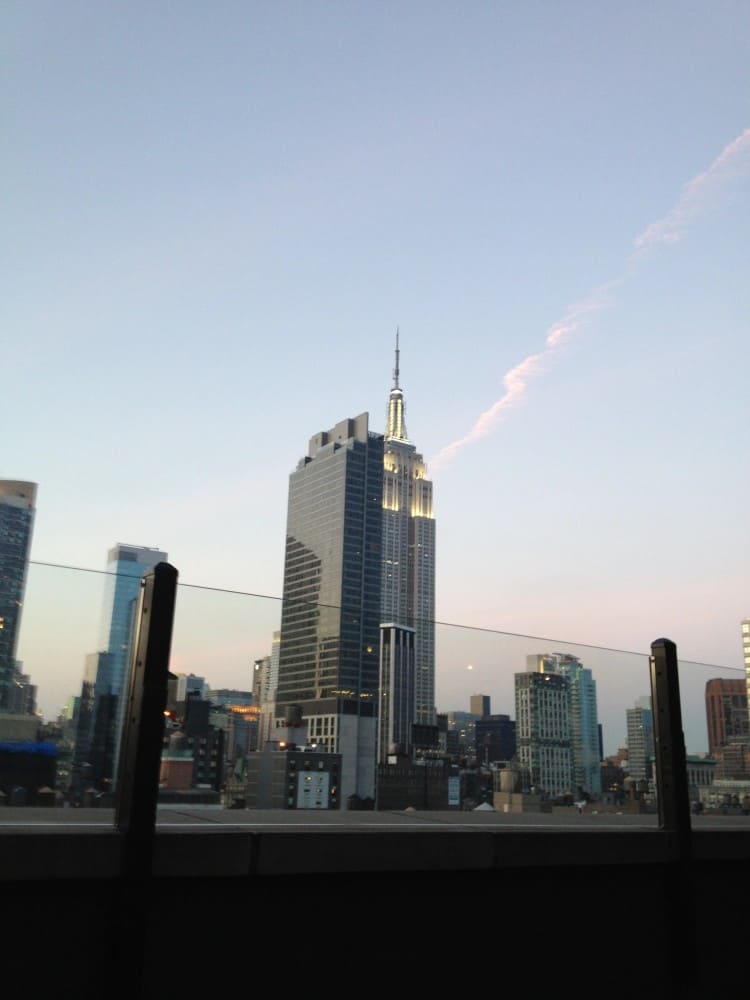 Long after the sun went down we wandered over to The Meatball Shop - first-for-all - where Melinda had her first Manhattan at the Under Balls bar while we waited for our table. I had the spicy pork meatballs with roasted eggplant and pesto and the family jewels - a fried egg on top. 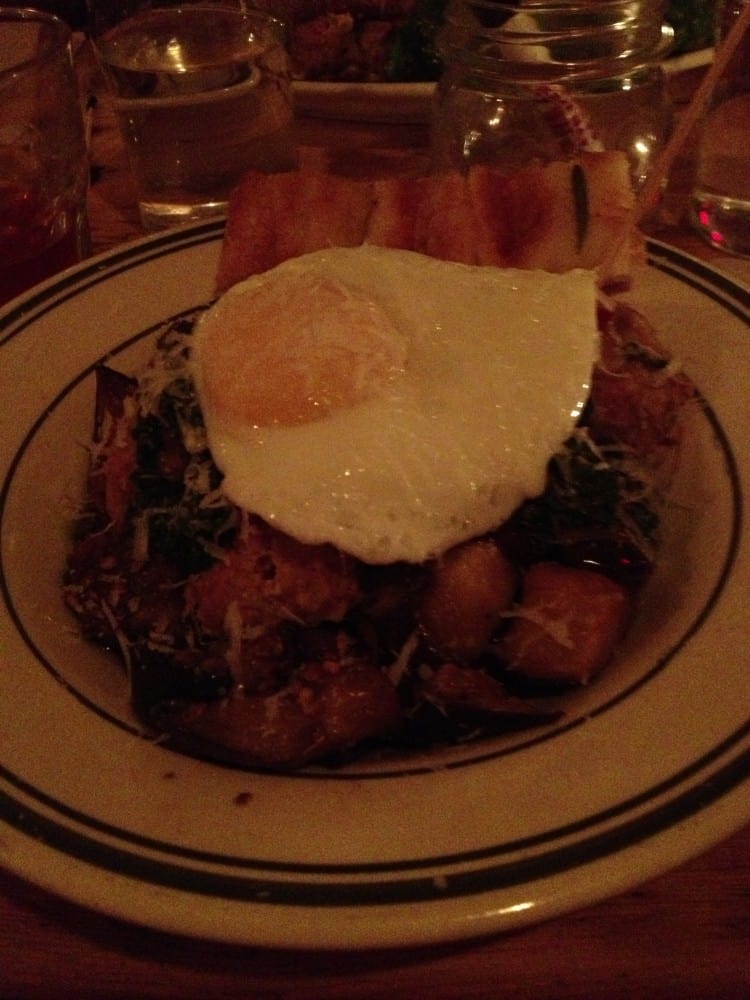 Yes, another iphone shot. It was the end of the weekend. It was late. I was hungry. Oh and I forgot to even bring the good camera.

It was too hot to even walk to our usual haunt, the French Roast, we could only make it five measly blocks to Cafe 82. Our final first-for-all. And you can't go to New York without hitting at least one diner. And I love how the food comes out in about 45 seconds. And still tastes good.

So let's see, my final thoughts on this trip? A yummy, sweaty, adventurous, cheap eats extravaganza.

And I learned a little bit about how to navigate the challenges of my new bloggin' lifestyle:

1) Take good camera along at all times

2) Don't get sweat in your eyes

3) There's a first time for everything

Hi, I'm Debra! I love to cook and eat and travel, and cook the things I eat when I travel! I'm a detail-oriented Virgo, so it's my jam to simplify recipes and break them down into easy to follow steps. I help you bring the world to your table!

Get my new, and tried and true, recipes delivered to your inbox! Subscribe now!