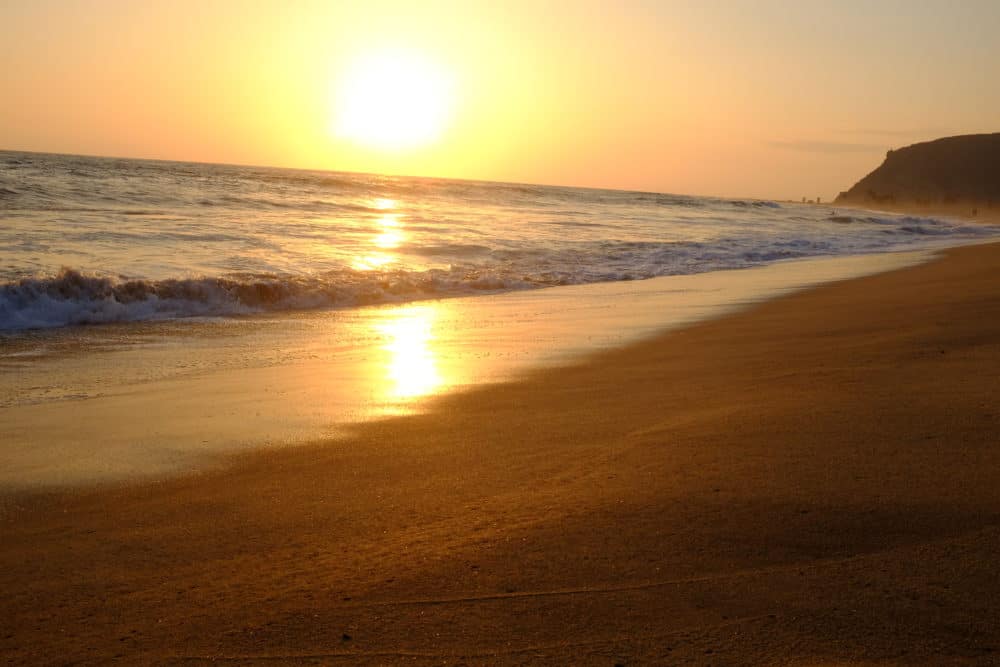 Just call me the queen of procrastination. It has shamefully taken me nearly two months to share this recipe with you, and the impetus of my finally getting this done is the fact that I am leaving on another trip this week that will most certainly yield more fodder for this blog.

So we went to the beautiful Rancho Pescadero in Baja over the Fourth of July. A tranquil resort far removed from the "one tequila, two tequila, three tequila, floor" bars found in the Cabo area. This quiet, adults-only resort caters to a more disconnected vacation - light wi-fi, no TV - and those interested in the finer points of Mexican cuisine and cocktails. The hotel features a garden that supplies much of what the restaurants serve, and chefs Jeff and Susan Mall have created a menu that showcases the best of the local produce and highlights the authentic food of the region and beyond.

My husband and I took an incredible cooking class with the husband and wife team and made three dishes: almond-orange mole, a real Baja shrimp cocktail, and green rice. You'll see all of them here eventually, but I chose to start with the mole. This is a quick mole, a bit of a cheat, and you'll be so glad. It's not the typical three-day, 100 ingredient sauce. You can decide you want it this afternoon and make it tonight. It's a smoky, bright, citrusy almost creamy (although no cream in it) sauce that goes with fish, pork or chicken. 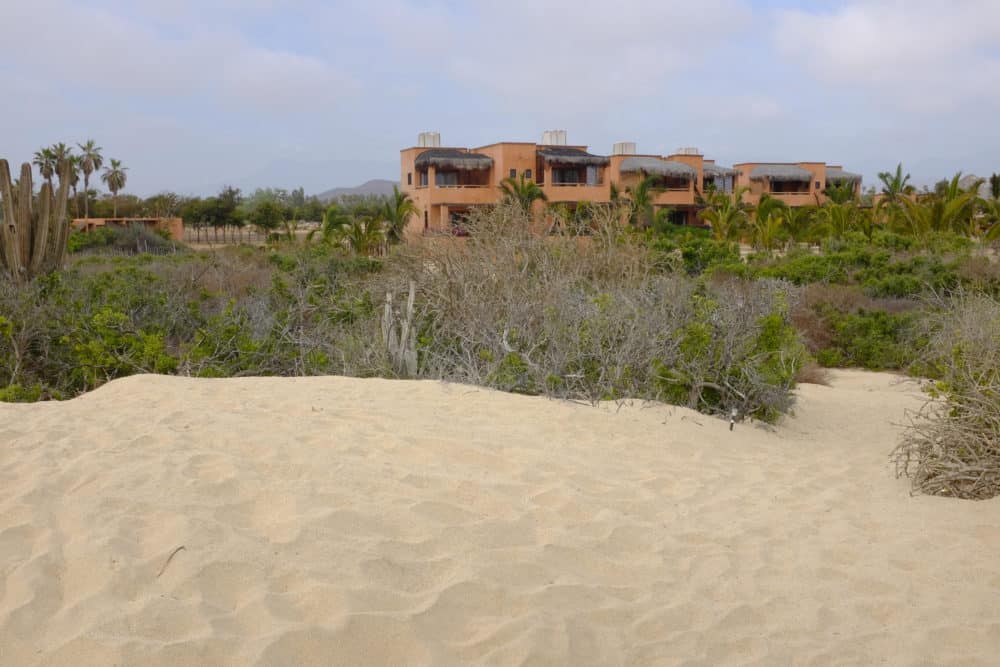 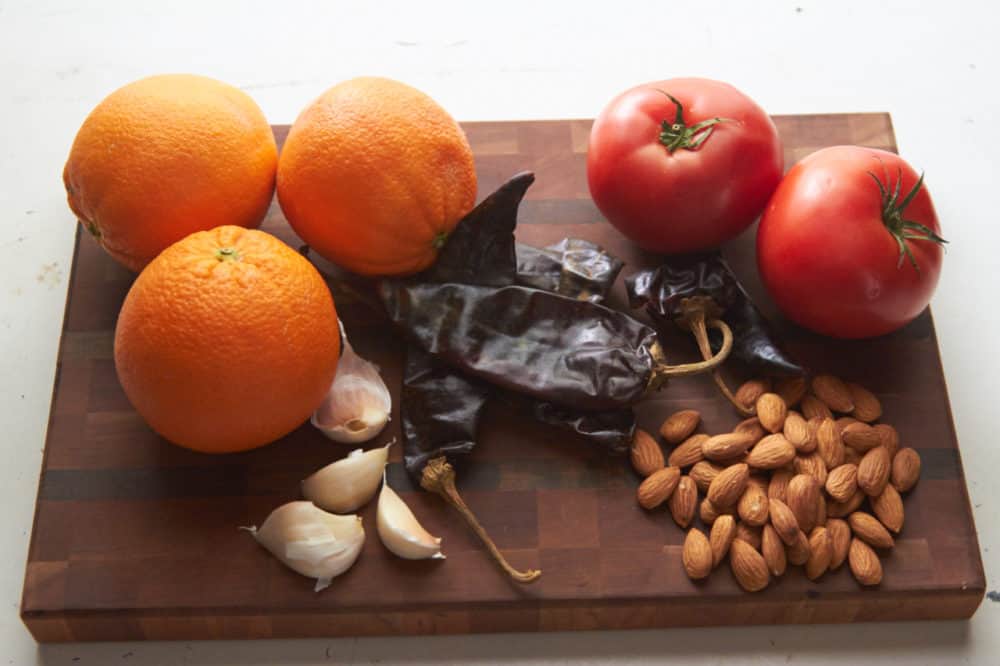 About 3 guajillo peppers - no stems, no seeds 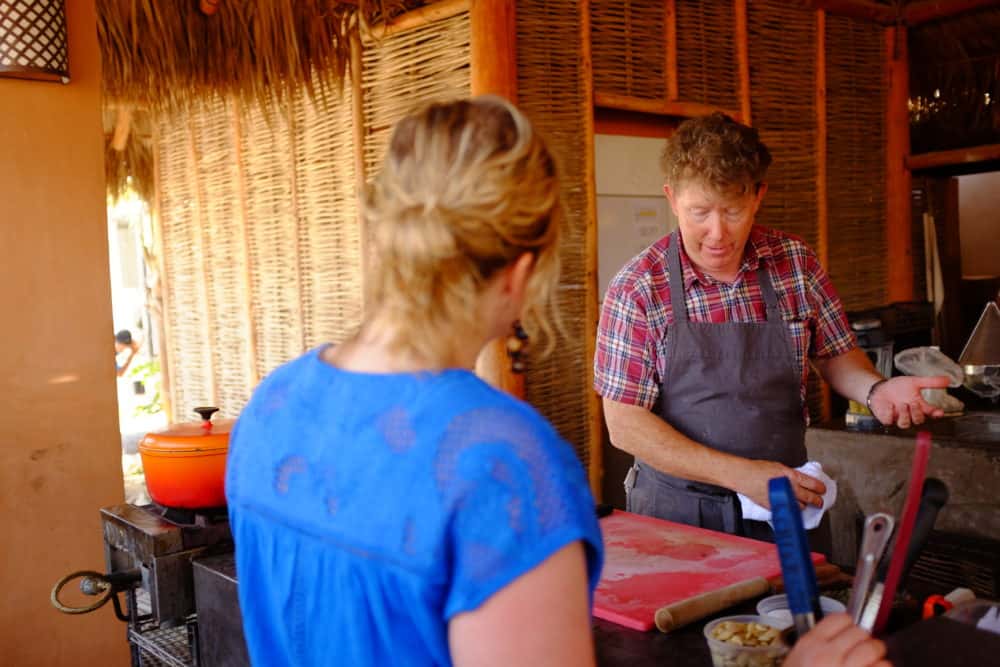 For the mole sauce, roast tomatoes until blistered. I sliced mine in half and did this in a cast iron skillet on the grill, but you can also roast them whole in the oven.

Roast garlic cloves for puree as tomatoes are roasting.

Remove seeds, stems and ribs from guajillo peppers. Heat a dry skillet on the stove top, place chiles in the pan to toast lightly - just until they become fragrant and pliable. Do not let them get brown/black. This will ruin the delicate flavor. Remove from heat. Take boiling water off heat and add peppers. Rehydrate them in water for about 15 minutes. Be sure they are covered with the water. 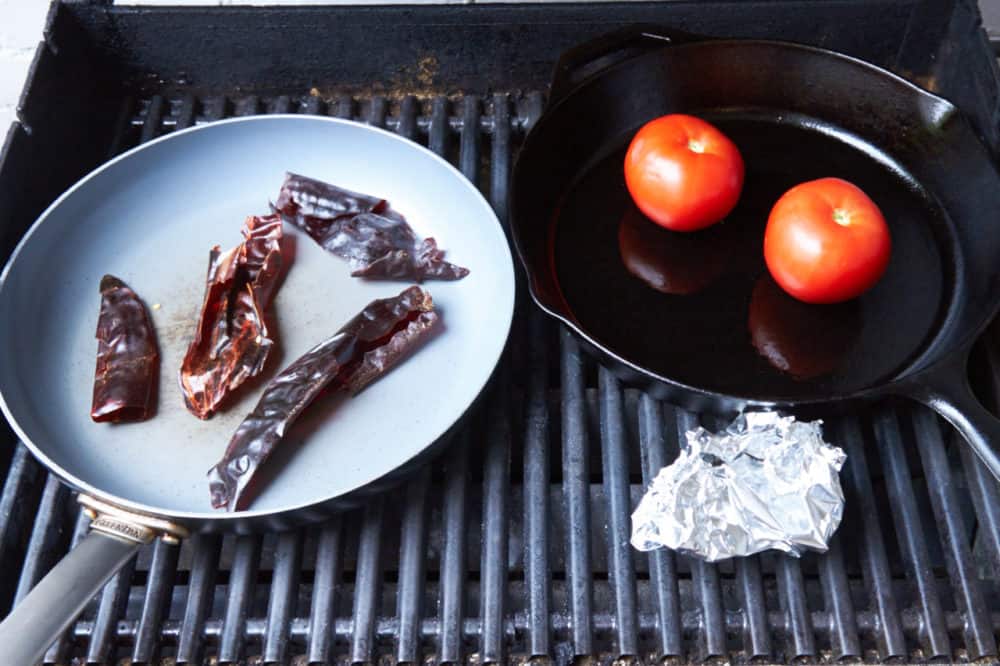 Blanch almonds in boiling water, let soak for a bit. Once water has cooled, remove skins. You can just grip one end and they will shoot right out of the skins easily. Be careful you don't shoot them all across the kitchen. 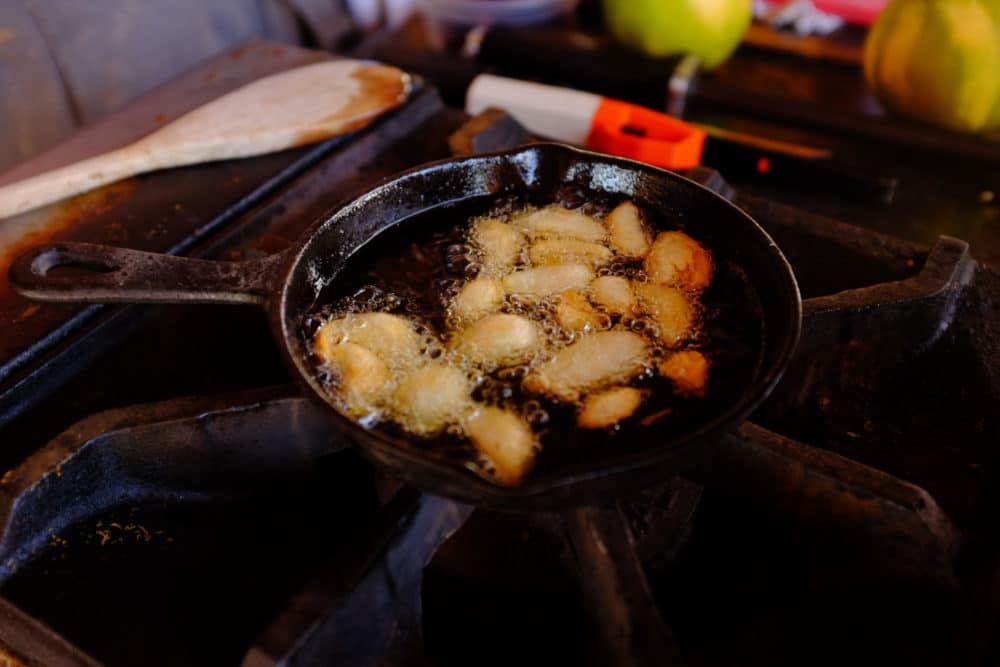 Remove Peppers from soaking liquid, but do not discard liquid.

Zest oranges. Slice in half and grill. Once cool, juice the oranges. 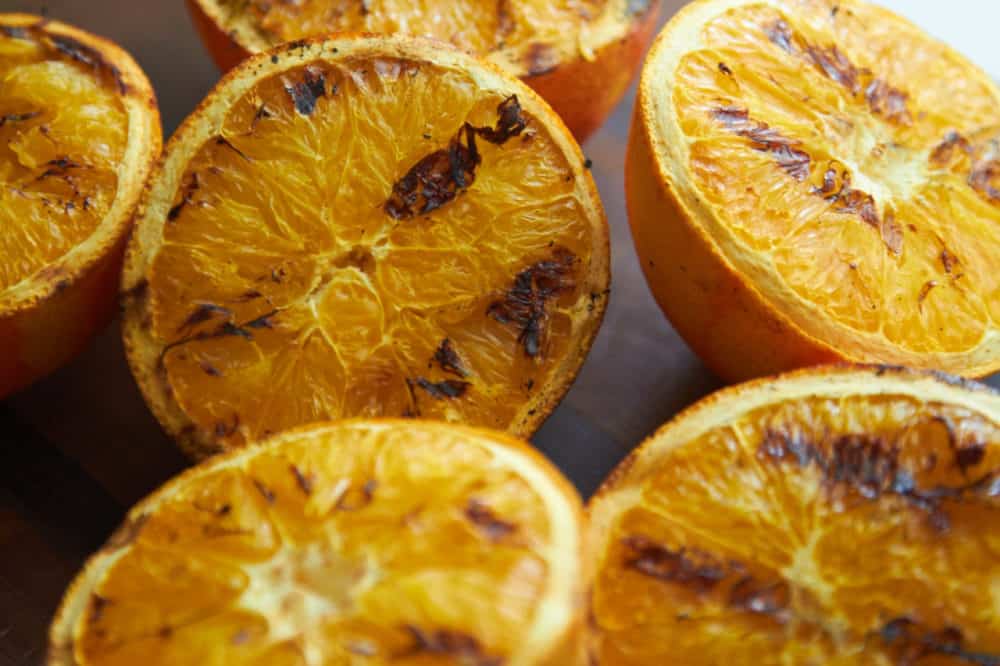 Place almonds, peppers, tomatoes, orange juice, orange zest, roasted garlic, cinnamon, salt and honey in a blender and puree. Add the water from the peppers as needed to thin the sauce. Season again with salt to taste. 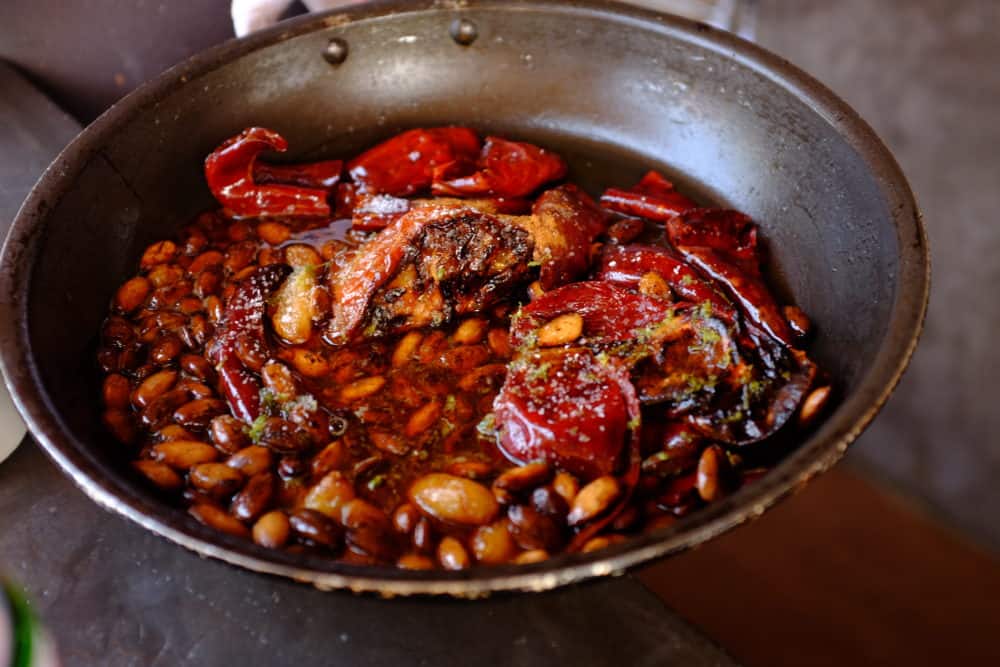 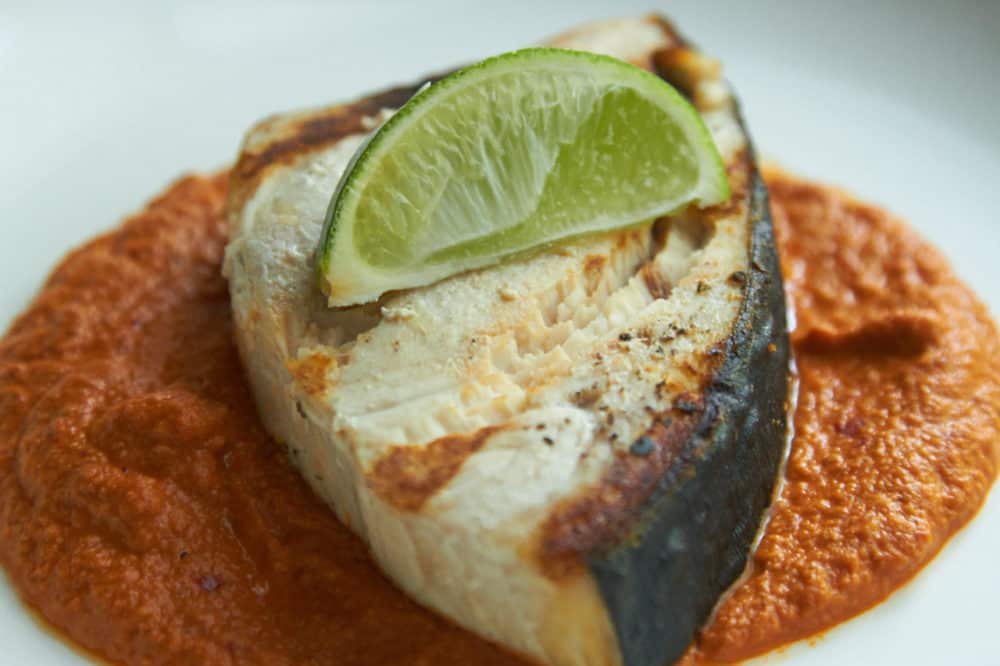 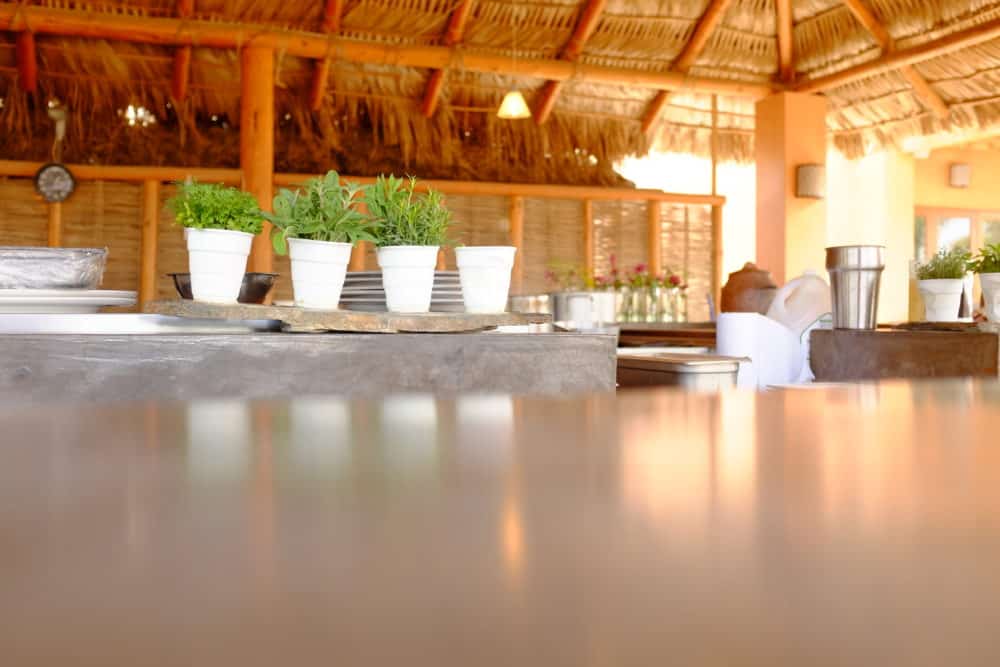 Hi, I'm Debra! I love to cook and eat and travel, and cook the things I eat when I travel! I'm a detail-oriented Virgo, so it's my jam to simplify recipes and break them down into easy to follow steps. I help you bring the world to your table!

Get my new, and tried and true, recipes delivered to your inbox! Subscribe now!